Congratulations going out to The LPC Wild Minor  Atom A Team who brought home the gold from the Niagara Falls U.S.A. Blizzard Challenge Tournament January 19-21. The team went undeafted & only giving up 2 goals.

A weekend that won’t be forgotten, beginning with the weather that was so fitting to the tournament “Blizzard”.  And an ending that we werent sure what would happen after a few of the boys caught a stomach flu, including the goalie.  But nothing was going to stop them from bringing home the gold, the boys battled hard & never gave up.

They represented LPC & the MHL with great sportsmanship throughout the weekend. 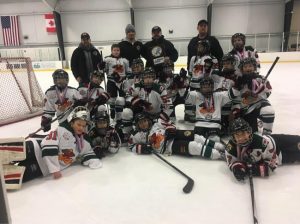